This week for my comic review, I’m taking a look at The Fisherman. This is a different review for me, because the Fisherman is done by indie comic maker (and fellow Ohian) Aaron Lindeman. Reviewing Will Eisner was a lot of fun, but I’m excited to report on the local indie scene, so let’s get started! 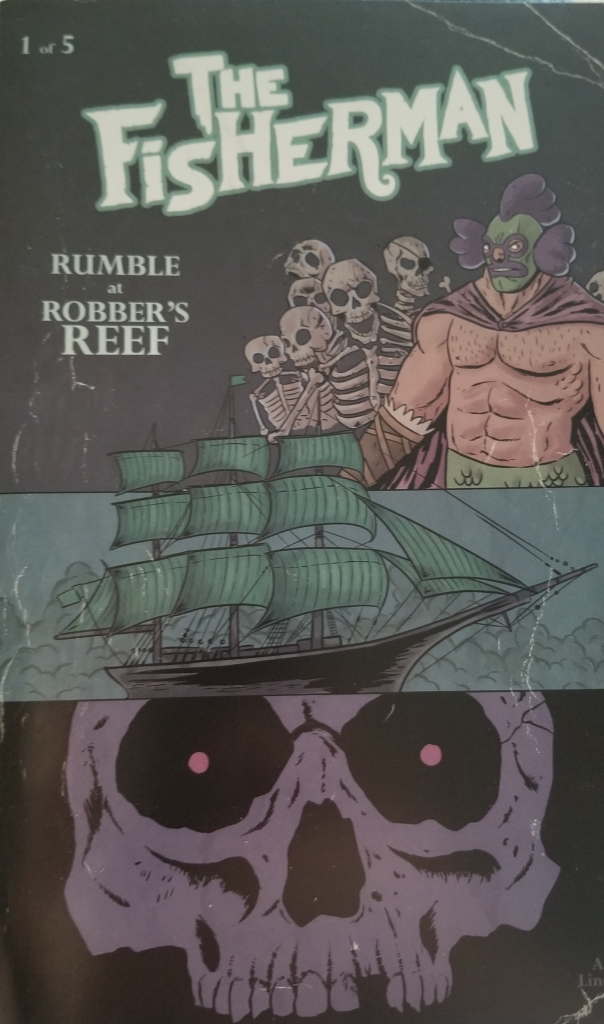 The Fisherman is an adventure comedy story that pretty much ticks all my boxes. The main hero of the book is a luchador named El Pescador (the Fisherman). He and his companions (Silvia and her uncle Chimo) are looking for a magical treasure, a quest that takes them to a haunted lighthouse. If you’re not into luchadors, magical treasure, and haunted lighthouses, I feel bad for you. What do you even enjoy? I try not to give too much of the story away, so you can read it for yourself. But I think the above is essential information for creating new readers.

So, time to review! First, the story. I enjoy the Fisherman because it is an action story with comedy, but the comedy doesn’t feel forced and, contrary to some comics, actually makes me laugh. El Pescador is a noble and strong hero, but he’s also kind of dumb. In a very endearing way. He LIVES to be an adventurer. He aims to live the true and full life of adventure; fighting, following treasure maps, and coming up with cool one liners like in 80s action movies. Maybe I shouldn’t say he’s dumb, but rather lacks common sense. There’s a point in the book where he recognizes a type of spider, almost scientifically. But at another point, he nearly eats some mysterious food laying around an abandoned lighthouse. It’s a nice character fold that keeps him from being too flat. However, even if he was just a dumb luchador with a big ol’ heart, I’d love him just the same. Silvia and Chimo are great characters to accompany El Pescador, because they fill in the common sense that he lacks. This is an adventure party that will go far, methinks.

Let me switch here to talk about the comedy elements of this book. Not only does he have witty writing (“Ah, this looks promising! Or is it foreboding? I’m always getting those two words confused.” I laughed out loud at that), but also Aaron does a great job in using the comic medium to get laughs. There were quite a few times in this issue that things in the background gave me a chuckle. That’s a big strength of the comic, you can use the whole picture to convey information. In movies, things keep moving. But in comics, I can study the whole picture and find new information that adds to the tone of the story. For example, there are two panels side by side that use the ol’ painting with moving eyes bit. It was subtle, and when you notice it, you appreciate it.

I also appreciate that this story has all the makings of a classical adventure tale. You’ve got magic amulets, undead pirates, spiders. There are different moving parts that will eventually come together to create some sort of epic fantasy clash, me thinks. By the time all five issues come out, I think this will be a proper quest complete indeed.

In terms of art, I’m a big fan of Aaron’s. It possesses a unique quality that allows it to stand out among other indie books. I can tell when Aaron drew something. The art work in this book helps us walk the line between action/adventure and comedy. Chimo looks like a pretty regular guy next to El Pescador with his exaggerated physique and luchador crime fighting costume. Aaron is also really, really good at facial expressions. Every single panel (well, the ones with faces) has a very clear expression. I mention this because this is not always clear when I make my own comics. So it’s something I pay attention to these days. Looks of fear, disbelief, joy, and anger are all elevated above the minimal effort. That is, they don’t just convey emotion to the reader, but they give a sense of who each character is. Silvia has different expressions than Chimo and El Pescador. It’s not all just angry eyebrows or narrow eyes. Each person has separate ways to convey emotions.

Now, let’s talk coloring and lettering. I’ve always been a fan of Aaron’s coloring. This issue is mostly a darker colored book (lots of greens and purples) but nothing runs together. It is very easy to misuse color, especially darker colors, to distort the art. But not here. These colors are used to help set the spooky tone of the abandoned lighthouse. The colors of this book help add to the depth of story telling. While reading I felt quite immersed, in large part, due to the coloring.

I know that most people don’t read reviews, or comics, about lettering. But I review it all! The comic is the sum of all it’s part. Aaron’s lettering does the job here in that it doesn’t distract. Sometimes people don’t center their words in the bubbles, or they leave too much white space, or not enough. But Everything looks good here. And this book has some well designed sound effects as well!

Needless to say, I enjoyed this book, as I enjoy anything Aaron puts out. You should read this book. IN FACT you can check out his work here.  I look forward to reading the next issue of Rumble at Robber’s Reef, and solving this mystery with the crew of The Fisherman.

Gee, I really thought this review would be a lot shorter…but I guess I can’t stifle my love for comics…or talking for that matter. But hey, if you take nothing from this, or you just skip to the end, then I’ll summarize it this way: read this book.