I sit here, and stare at the screen, thinking about what to write. One name continues to scroll across my mind: Carl Barks. Where Karl Marx ran foul of capitalism, Carl Barks ran with the most capitalistic of fowls. I’m so happy I got to write that joke.

Carl Barks, the creator of Uncle Scrooge. The writer and artist of many, many Donald Duck/Scrooge McDuck adventures. He is, also, a champion of my heart. Ever since I started to draw my own comics, I have payed more attention to cartoonists. And I’d be hard pressed to say that there were many people who left more of an impression than Carl Barks. Here’s the funny thing, though: I didn’t read any Carl Barks until I was in my 20s (the last couple years, in fact). I didn’t even know who he was until I started making comics. I had never read any of his stories, but I knew his name. Then, I picked up a Library Edition of Carl Barks’ Scrooge McDuck stories (from the library, of course). And I fell in love. In the beginning, I had my doubts. I worried that it would feel dated, that the art wouldn’t age well. But that first volume of stories quelled any worries I had.

The drawing was beautiful and had depth. Every panel conveyed to the eye what was going on, and what the world in which the ducks lived was like. The writing was genuinely funny. I usually find that old comedies don’t work for me because the times have changed, as has the humor. But what I learned reading Barks was that a good joke will be funny no matter what. Barks’ ducks went on any kind of adventure you could think of. With the depth and width of his stories, it’s not hard to see why he influenced so many creators. One minute Donald or Scrooge is the sheriff of a frontier town, then  looking for lost treasure in South America, or sailing around the world. I’m pretty sure these two ducks were the original Indiana Jones. As I’ve said before, Indiana Jones was influenced by Scrooge. (See giant boulder scene).

But there’s more! While these characters were similar in their adventuring lifestyle, they were quite different elsewhere. Scrooge was a rich, successful hero. He set out to conquer, and conquer he did. He was the wealthy good guy we could root for. Unlike Flintheart Glomgold! I’m shaking my fist at you, Glomgold. And Donald was the every man. He was us. He was a normal guy, trying to get ahead, and often failing. But it was funny, so it was OK. He was always in above his head, but acting like he was doing just fine. These two ducks are some of the greatest characters in comics.

But, let me turn my attention to the man behind the stories. Carl Barks was writing these comics from the 40s to the 60s. That means that he started making these comics before the Marvel Age, when comics started to explode. That means a couple things; firstly, he was working in a time when the path of comics was still be carved. While there were successful comics before this, there was not nearly the industry we know today. This also means that Barks didn’t grow up in a world where making comics was a career. And it certainly wasn’t an art. Yet, he worked to elevate the form. Here’s the other thing that really gets me: for a long time, he wasn’t credited for his work. Of course, this was common practice back then, but it’s hard to believe now, as we see creators rights as an important issue. The work had no credits, and was simply known as “Walt Disney’s (insert title).”

And things probably would have stayed that way, if Barks wasn’t so good at what he did. See, the readers of the duck stories noticed that there was a single creator behind the duck stories. They could tell that all the art was coming from the same person. So the fans labelled him “the good duck artist.” And that’s what Barks was known as for a while. And the only reason he came to be known was because the fans (serious fans they were) figured out who he was. Not only was he one of the true greats, he did it for no real recognition. That, my friends, is a hero. That is Carl Barks. 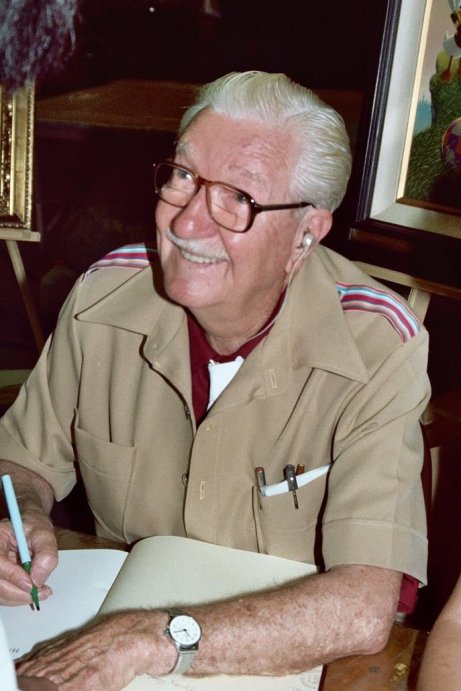 Of course, he would get his recognition in the end. He would influence countless creators. And I read somewhere that Will Eisner once called him the Hans Christian Anderson of comics. You know, that guy that wrote a couple of those fairy tales, nothing big. He’s one of those cartoonist that has stood the test of time because of the quality of his work. That in itself should be enough to earn him his place in the hierarchy of comic creators. Of course, there are probably lots of readers who don’t know him. But, if you want to get into some good stories, stories that are truly fun, and will make you remember why you love comics, Barks is the guy for you. There’s a sense of heart in the duck stories that you won’t find in many books you read.

So, if you’re looking for something to read, or if you want to see if my words hold true, go find the Library edition of these stories. The good people at Fantagraphics continue to do the lords work in collecting the stories that you might not find elsewhere (or at least for a reasonable price). Some of them look a little thick, but they go pretty quick.

So in the end I just have to say: thanks, Carl!