It’s the last Friday Review of 2017, so let’s finish up with a bang: Moebius! I’ve been meaning to dive into the work of Moebius for some time now, but I’ve had trouble finding some. Then the people of Dark Horse started doing the Lord’s work (sorry Fantagraphics), and I found this collected, translated edition of the World of Edena.

The World of Edena is a marvelous science fiction story that’s split up into several episodes (called cycles here). The plot is basically thus: two space travelers discover the paradise planet of Edena, get separated, and spend the rest of the story trying to find each other while dealing with all the dangers of the planet. That is a very simple explanation. Actually, it’s a little too simple. But if I start going on about this, the whole review will just be a summary. Suffice it to say there’s a lot of weird stuff happening here including what I think is God, the Devil, and some wacky stuff about dreams. But given my love for Twin Peaks, I ate up the theme of dreaming. There’s a lot of cool sci-fi stuff in here, and, ultimately, this book ended up feeling like a comic book epic. See, I’m already going down the rabbit hole, let’s move on here.

Moebius (real name Jean Giraud), both wrote and drew this book. To which my first thought is, how did he get so much stuff done? This book seemed like a lot of work. The man was a true hero. Anyway, I have always heard about how good Moebius is, mostly in regard to his art (which is INCREDIBLE, but we’ll get to that later.) But his writing was also quite good. Each cycle was interesting and the pacing felt right. He switched back and forth between the two main characters (Stel and Atana), which kept the story moving. It also helped build the epic feeling that I mentioned earlier. Because they were separated, we got to see events unfolding in very different areas. This really developed the actual world of Edena. 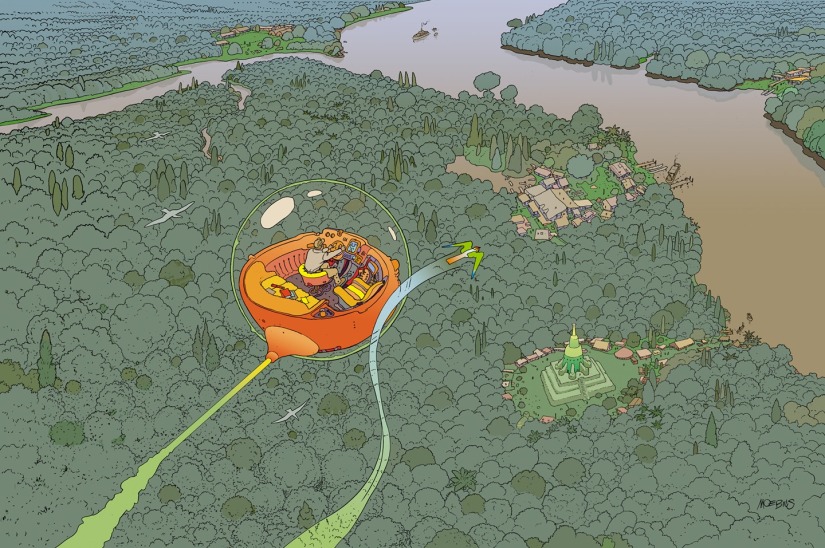 There’s some of the world.

I liked the writing because it kept moving. Each cycle was so different than the last. The first parts of the story begin in the far future, where Stel and Atana are flying around in space. Then they crash down on a planet, meet a bunch of other stranded space goers, and everyone is eventually sucked up into a giant blue pyramid. It’s only after all of this that we get to Edena. So it really did move in cycles. This kept it fresh and interesting, and it also made the story feel like a true sci-fi odyssey, instead of just another sci-fi story.

Now, let’s talk about what I’ve been waiting to share with you, the entire world: the art. As I said before, Moebius is always talked about for his art. I think that he’s one of the true greats of the medium. I would assume there are a lot of people out there who haven’t heard of him because he was French. But now that Dark Horse has these Moebius Library coming out, I hope that changes. I’ll say though, I’m not sure I’m qualified to talk about his art. I mean, to me, almost every panel could be a painting. I could look at it, study it, for a long time.

There are a couple of really incredible things about his work. First of all, it’s level of detail. Now, what’s funny is, in the forward to this book, Moebius said that this story was an exercise in cutting down on detail. Well, after reading this story, it’s hard to imagine what his other full work looked like. The detail must be crazy! That being said, I found an odd balance of detail and simplicity in his drawings that I found quite beautiful. His characters were pretty simple, and his landscapes were vivid.

The other thing I noticed, and LOVED, was how vast his world seemed. Panel after panel depicted this world of Edena, and Moebius was able to fit so much into each picture. It felt like a real world. At the same time, it had this quality of containment. We could see the focus of the image, but there we could also see for miles and miles. He was able to balance this feeling of big and small so perfectly. I don’t even know how to properly describe it to you. You just have to see it for yourself.

Look how the focus of the image is so clear, the flying ship. But also notice the crazy amount of landscape we can see. It’s so very vast because we can see so far, but contained because of how the things in the foreground look. It’s this duality, this ability to create such illusion, that makes the visuals of this story so appealing. Moebius, in Edena, anyway, is able to put us in this huge world, but keep us grounded.

I will also say that I really loved the colors of this book. Some of it was done by Moebius, but others helped him. There are some very normal colors, but then there are some wild, very sci-fi color choices that are made. This really enhances the story because it works so well with the work. Sometimes colorists just get it, and this is one such case.

Gosh, I feel like I’ve gushed about this book a lot. But honestly, if you want to understand the medium better, and see what sort of things can be done, read this book. It really felt like something that was ahead of its time, and possible from another world. If for nothing else, you should check out Moebius because, after reading this book, I’m convinced he was one of the greatest of all time. One things for sure, I can’t wait to get my hands on more of his work!