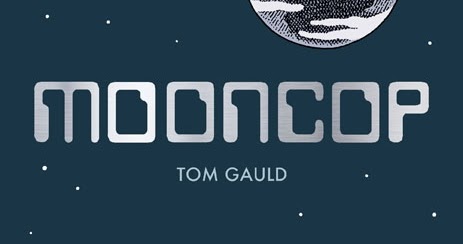 You might be asking, “what is Mooncop about.” And then I look at you and say, “It’s about a cop. On the moon.” A premise so simple maybe you could have come up with it yourself. But you didn’t! Tom Gauld did. OK, maybe you did have this idea, but you didn’t right this book. Tom Gauld did, remember? This is a book that is all about a cop on the moon, only there’s a very, very small population, and no crime. You might be thinking of a book in which a cop jumps around the moon, shooting space bullets, and wrasslin’ lunar thieves. This is much more down to Earth. Er, the moon.

That’s one of the things I particularly like about this book. It takes a concept that could be wild, and brings it down to a mundane level. It really lends itself to some subtle comedy and some unexpected story telling. By this I mean we watch the lone moon cop report about his zero crime, get donuts, and watch as everyone around him is replaced by robots. Robots that think he may be clinically depressed. At least I as a reader can relate to that. Ha ha…ha?

Uh, anyway, this was a story I really enjoyed. The simple plot (see: cop on the moon) was full of charm and humor. I had never read anything by Tom Gauld before, but I’ve since followed his Instagram and come to find that he possesses the same subtle sense of humor that runs throughout this book. I liked this a lot because it’s sometimes easy to play up words and pictures to an absurd degree to get laughs in comics. I mean, it makes sense, because it’s a silent medium, but I enjoy a more thoughtful approach to humor as well. Gauld’s writing also lends itself to our relating to the Moon Cop. Everyone has felt alone, or useless, or gotten to some place, only to find it’s not what we expected it to be. Like the reality of doing something really cool (finally going to the moon!) to discover it’s pretty mundane. I like that kind of balance in my story. They don’t all have to be that way, but if you do it right, it’s an interesting approach.

The feeling of this story was really aided by Gauld’s art. His simple but precise drawing is something that I really enjoy looking at. The way the shapes come together to create a full object (bodies, buildings, robots, etc.) are actually deceptively simple (I tried to find a synonym, but they all sound wrong). I mean, I tried to draw it myself, and it didn’t look quite right. He’s another one of those cartoonists who has a very unique style that, while it looks easy, can’t be totally replicated. The drawings of this book also helped the tone of the book (i.e. the simple nature of something so grand as being on the moon).

I was also very much into his shading and crosshatching. This is probably what made this book (and makes his art in general) stand out so much. The darkness of the moon lends itself to all the shading in this story. It creates a feeling of shadow and texture that stimulates the eye. Well, my eye anyway. I don’t know if it’s because I like to try and employ a somewhat similar (but far less controlled) method when making my comics, but who can say? My therapist? My mom? It also helps to add contrast to the all blue and grey colors of this story. I mean, that makes sense, because he’s on the moon. And it doesn’t make anything hard to read, but the line work really helped to create a far more dynamic page.

Anyway, listen, here’s the deal, I know that I usually go on and on in these reviews, but I’m cutting back now. For real this time I find that most of my reviews are longer than they need to be. Plus, this was a quick read, and as much as I love it, I don’t think I can keep writing when I feel I’ve said all I need to say. This type of writing feels forced when read. I’ll just say this: Moon Cop was a fun little book, and I look froward to reading more from Tom Gauld. In fact, I think he’s quickly becoming one of my favorite modern cartoonists. So, Tom, if you’re reading, I’m into it, man.