This week I take a look at the ridiculously named Shirtless Bear Fighter from Image Comics. You pretty much get what you expect from this one, so let’s jump in.

Shirtless Bear Fighter is a five issue mini series from Image. So, it was a rather quick read. It was written by Jody LeHeup and Sebastian Girner, with art by Andrew Robinson. I read this book because an artist friend of mine said he really liked it. This story is an absurd comedy, and I mean that in a good way. Here’s the basic story:

A baby is found and raised by bears, kind of like Tarzan. But, you know, with bears. He becomes a big bad bear man, until he falls in love with a human woman. He thinks the bears did it, so he turns his back on them. So the story picks up with him trying to save the forest from an evil corporation cutting down the trees. A story as old as time, right? Right?

Sure, it’s a simple enough premise, but the story adds a lot of elements that make the reading so enjoyable. This is a comedy book. I’m a little particular about those sometimes, but I found myself laughing quite a bit while reading this comic. There are the little things, like the Bear Fighter, who, by the way, is referred to only as Shirtless Bear Fighter, or Shirtless, being paid in flapjacks. Then there’s stuff like the sound effects. Every time he hits a bear, the sound effect is simply “Bear-Punch.” There’s also a running gag about his FBI contact, Burke, and just how old he really is. And there’s a character who uses the term “Hawg teats” multiple times. Wow.  There is s a lot of written comedy, and a lot of visual comedy as well. And to use both of these things together is what makes a funny comic. Plus, as I said above, this story was just kind of absurd, and absurdity makes comedy. 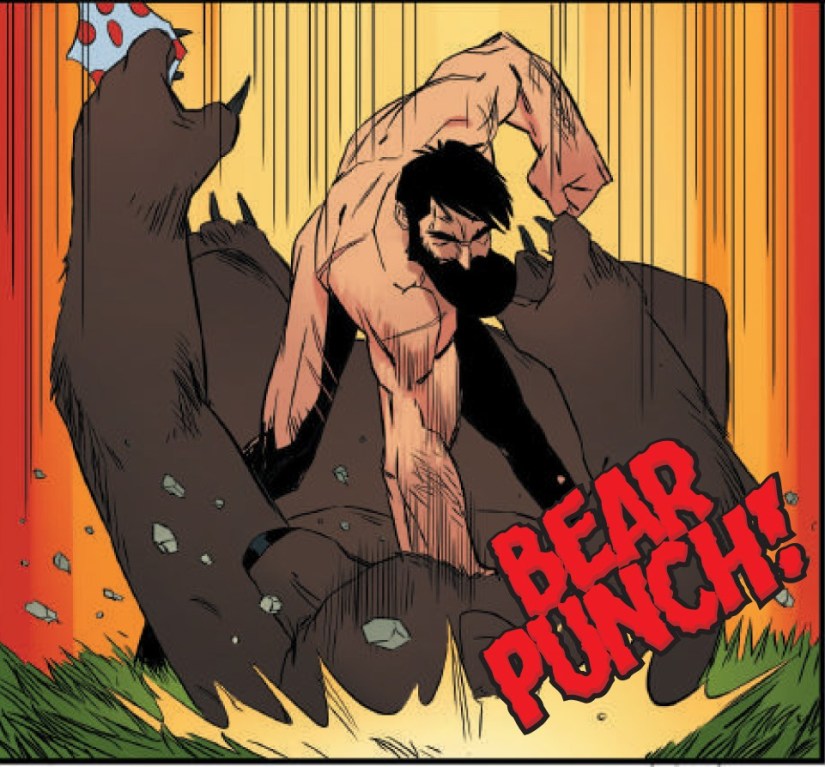 I won’t say this was a particularly deep comic, but not all comics need to make you question your existence in time and space. Now and then, you just need a fun comic, and that’s what this was: fun. A classic tale of betrayal, revenge, man vs. nature, man vs. uh…bear. The nature of the comic and it’s comedy don’t prevent the story from being good, don’t get confused. I don’t need every book to be the massive From Hell by Alan Moore. Sometimes, all I need is to see someone fighting a bunch of bears. I think that’s something we can all relate to.

I will say, however, I didn’t care too much about the human villain in this story, the head of the corporation trying to cut down the forest. He was kind of fun, I suppose, but I was more interested in his right hand bear, as it added a more serious level of conflict with Shirtless Bear Fighter, as this was the bear who betrayed him. But, the amount of bears in this book helped me overlook a bad guy that I wasn’t totally invested in. And besides, this is very clearly a vessel for the man without a shirt. Some stories (Batman cough cough) run the risk of turning into something for the antagonist. But this was a little more black and white. Like…a panda bear. And I’m totally fine with that because, you know, bear-punch.

The art in this book was pretty good too. It wasn’t overly rendered, which lends itself to this story. The type of art should always aid the tone of the story. This art was realistic enough that no one looked like a living cartoon, but didn’t take itself too seriously. Which really helps when a man is being mega power bombed by an evil bear, you know? I do think that the best art was done on the part of Shirtless. He was a very expressive character. And also, he’s like, really big. So there was always something to look at with that guy. Even if it was his blurred out privates.

It’s at this point, when talking about art, I have to wonder if Andrew Robinson could have ever dreamed that he would be drawing this many bears in his life. I mean, there are so many bears. That sounds like common sense when talking about this title, but you have to stop and think about the artist, drawing every. Single. Bear. For five issues. I’m really getting tripped up on this.

Another thing I liked about this book was the coloring. It was a pretty light comic. I feel like a lot of comics are colored using dark colors, and they make the page look over all pretty dark. But thinking about this one, I see a lot of brightness on the page. Maybe it was just me. However, I thought it was good contrast to what I see a lot of the time.

In the end, I suppose it comes down to this: do you want to read a comic about a man fighting bears? If yes, this is the comic for you. If not, then I’m not really sure what you’re looking for in comics. And I don’t know if you’ll ever be happy. But maybe if you read this book, you’ll laugh. And that’s a start.